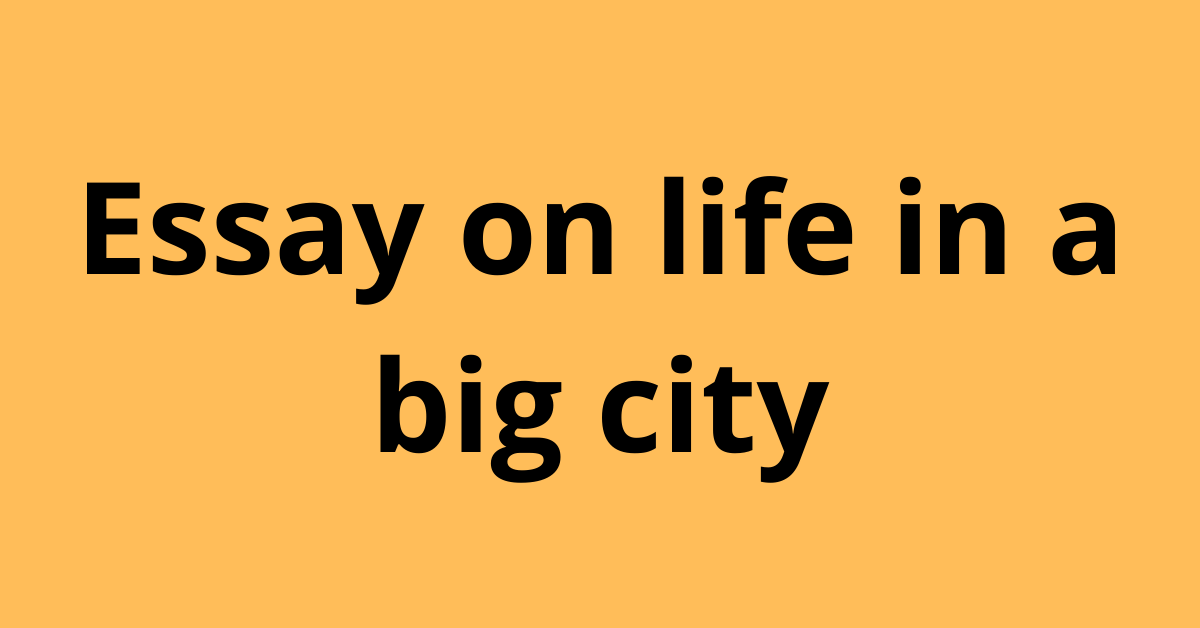 Essay on life in a big city

Nowadays, there is a large scale migration of people from the village to big cities. Though the villages have greenery, peace and fresh air, yet there are little chances of getting good jobs, Moreover, there are different charms and attractions of big cities, which attract these people

In cities, roads are properly metalled and well lighted. There is a large number of Civic amenities available in the cities. Cities have a proper sanitation system.

Treated pure water is available. There are different types of public transportation facilities There are big parks. Streets and roads have a proper lighting system. There is a well-furnished house in the cities. All these facilities are not available in villages.

Big cities have a complete education system. There are big universities, Government and private-public schools. There are big libraries. By living in big cities we can know about the all-out development of the country as well as of the world.

There is little casteism in cities in comparison to the village. People become liberal-minded in cities. The vision of a man living in cities widens

There are well-equipped hospitals in the cities. Every type of medical facility is available in those hospitals as they have well-qualified physicians and surgeons

Big cities have different sources of recreation and amusement. There are hotels, clubs cinema halls theatres and opera houses.

Moreover, there are many National and International Exhibitions: Festivals are also celebrated with great pomp and show in cities. There are unlimited sources of income. Due to this very reason the big cities are overcrowded.

Life in cities is not as easy as it looks. There are many problems in the cities. Firstly, the housing problem is a very serious concern.

The rents of the houses in cities are very high and a great part of your income goes in the way of house rent and then on transportation. There are long queues at bus stands. A lot of time and energy is consumed to reach your destination of work.

Generally, all the essential commodities are costly in cities. The air is so much polluted that one is bound to fall prey to the dangerous and fatal diseases.

There is a complete loss of social boldness in the cities. People like to lead a life of loneliness. That results in an increase in criminal cases like robberies, etc.

Short essay on life in a big city

Life in a big city is artificial. Man is completely cut off from nature. He has no contact with the sun, the moon and the stars. Life in a city is no doubt comfortable, but happiness is not found in cities. People in the city are always in a hurry.

They do not find joy in living. They work like the slaves according to a fixed routine. They are mere feeling fewer machines. They are made after the material comforts of life. They have no peace of mind. They have pale faces and sunken eyes.

Many of the city people live in crowded areas. They don’t inhale fresh air. Some of the industrial cities are very dirty. Karana, the bigger city of Pakistan, is said to be the dirtiest city in the world. Even Kolkata is a very dirty city.

The city people are selfish, greedy and cunning. They may dress well and have very good manners. But they are selfish creatures. City dwellers live a life of fever and fret.