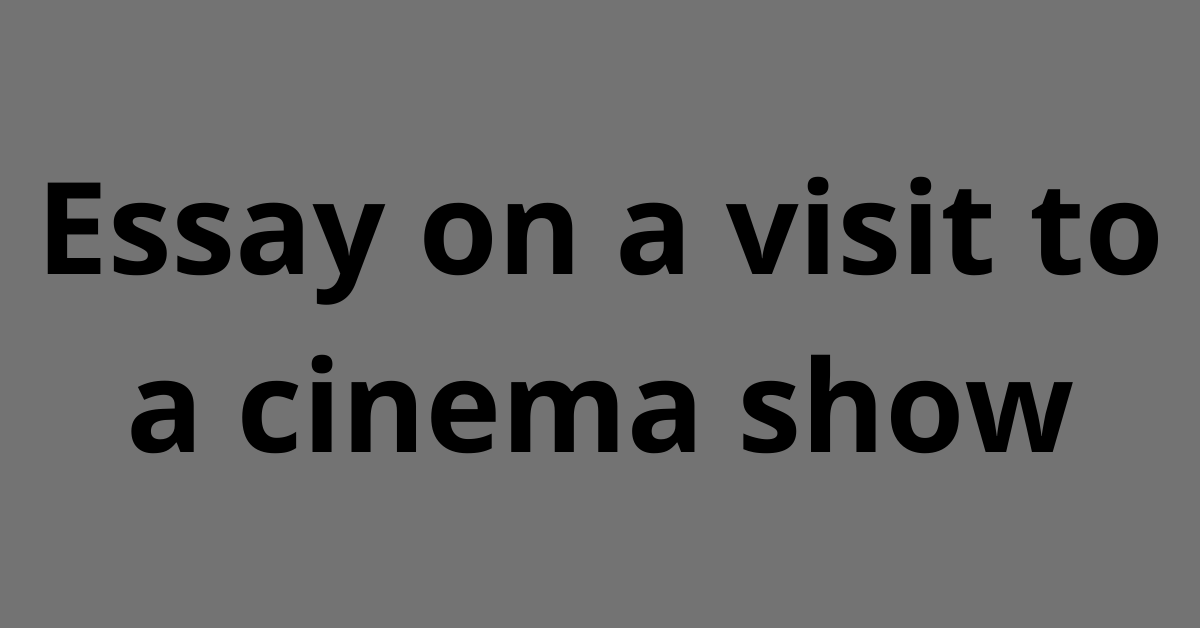 Essay on a visit to a cinema show

Last day of the month , I got an opportunity to visit the Ansal Cinema where Chak De India was being screened. I along with my friends, made a plan to see this super hit movie of famous Bollywood actor Shah Rukh Khan.

We reached the cinema hall at 10:30. was crazy to see this much talked about the movie. When we saw the poster outside the cinema hall, my craze grew all the more intense.

The poster showed Shah Rukh Khan as a referee I have purchased four tickets and entered the cinema hall. The entire hall was full to its capacity been a great fan of him. It rarely happened that I miss any of his movies.

I first purchased four tickets and entered the cinema hall. The entrance hall was full to its captivity. When we entered the hall, the newsreel was being shown.

Soon the movie started. I with my friends sat in the second last row. The movie from the very beginning to the end was highly inspiring and thought-provoking. The encouraging, lively role of the coach of the Indian women hockey team was appreciable.

It appeared natural and real. The movie has a message of promoting equality in society. Through this movie, the director has tried to bridge the gender gap in our society.

He has tried to show that the girls are not lagging behind in any sphere of life. According to him the girls also can do whatever the boys can. Through this movie, he has tried to expose the attitude of our society towards a girl.

A girl is underestimated in comparison to a boy. Our society has the attitude that a girl can never stand before the boys in terms of capability Intelligence and expertise. The movie has proved this wrong.

He works hard with his team. He always encourages his team to take up the challenge and struggle till the end to beat the opponent. Under his supervision, there was a great improvement in the performance of the girls.

When he as a coach keeps a proposal to organise a match between his team and the boy’s team, he is mocked at by his opponent at his proposal. When he Insists for the same, his proposal is accepted but is not take seriously.

When both the teams come to the ground, the girl’s team presents a big challenge. When the boy’s team could realise their folly, it was too late. The match has slipped into the hands of the girl’s team. The boy’s team barely manages to win the match by a solitary goal. The girl’s team is allowed to participate in the World Hockey Cup where it emerges as the champion.

Broadly speaking, Shah Rukh Khan unveils the mindset of the society which despite making great progress has failed to come out of the feudal mindset. The movie has a message. It creates social awareness. Perhaps this is the cause of this movie being very popular.

We use cookies to ensure that we give you the best experience on our website. If you continue to use this site we will assume that you are happy with it.Ok